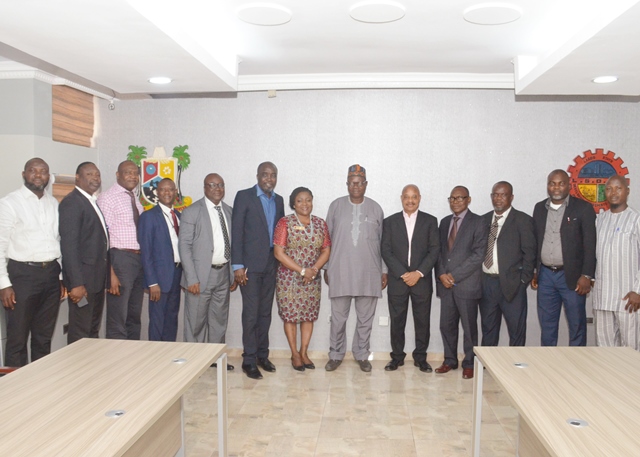 The Nigerian institution of Electrical and Electronics Engineers (NIEEE) Lagos chapter, a Division of the Nigerian society of Engineers has been charged to continue to raise the bar of professional performance within the construction industry.
Arc. Dhikrullah Adedoyin Har-Yusuph, the Ag Managing Director /CEO of LSDPC gave this charge during the courtesy visit of the executive of the institution.
The chairman of the institution Engr. Oloyede Olaosela MNSE, MNIEEE said their visit was to explore areas where the institution can partner with LSDPC in its quest to implement and deliver good infrastructural facilities for the progress of Lagos state. He also advised LSDPC to tap into the application of solar energy housing. He cited Total Petrol Stations in Alapere , Igbobi, Abule Onigbagbo, e.t.c as places where the proficiency of solar energy is being demonstrated having being installed by competent professionals.
In response to the institution, Arc. Har-Yusuph said the corporation will be willing to tap into the technology but will need to evaluate, the effectiveness and the affordability (cost effectiveness). He said the public need to be enlightened more on solar energy as those he has seen so far are failures. He added that the corporation will be willing to collaborate if found reliable & effective. The chairman of the institution was accompanied by Engr. Adeleye Adegboyega and Mrs. Shukurat Bolanle.
Earlier in the day, Arc Dhikrullah Adedoyin Har-Yusuph also received the management of Lagos State Urban Renewal Agency (LASURA) on a courtesy visit to the corporation led by his General Manager Mr. Lateef Solebo. The visit was to seek ways of collaboration with the corporation to seek information on the agencies asset resulting from the time of Lagos Island acquisition scheme.
The meeting discussed possibilities of mutual benefits on rents, sales, construction, land, etc. The meeting also called for review of Lagos State Rents Edictrentals, lease and consultancy services.